Welcome to the Renaissance Period

Raphael was born in 1483 in the small but artistically significant central Italian city of Urbino in the Marche region, where his father Giovanni Santi was court painter to the Duke.

The reputation of the court had been established by Federico da Montefeltro, a highly successful condottiere who had been created Duke of Urbino by Pope Sixtus IV – Urbino formed part of the Papal States – and who died the year before Raphael was born. The emphasis of Federico's court was more literary than artistic, but Giovanni Santi was a poet of sorts as well as a painter, and had written a rhymed chronicle of the life of Federico, and both wrote the texts and produced the decor for masque-like court entertainments.

Growing up in the circle of this small court gave Raphael the excellent manners and social skills stressed by Vasari. Court life in Urbino at just after this period was to become set as the model of the virtues of the Italian humanist court through Baldassare Castiglione's depiction of it in his classic work The Book of the Courtier, published in 1528. Castiglione moved to Urbino in 1504, when Raphael was no longer based there but frequently visited, and they became good friends. Raphael became close to other regular visitors to the court: Pietro Bibbiena and Pietro Bembo, both later cardinals, were already becoming well known as writers, and would later be in Rome during Raphael's period there. Raphael mixed easily in the highest circles throughout his life, one of the factors that tended to give a misleading impression of effortlessness to his career. He did not receive a full humanistic education however.

Raphael's mother Màgia died in 1491 when he was eight, followed on August 1, 1494 by his father, who had already remarried.

Raphael was thus orphaned at eleven, his formal guardian became his only paternal uncle Bartolomeo, a priest, who subsequently engaged in litigation with his stepmother. He had already shown talent, according to Vasari, who says that Raphael had been "a great help to his father". A self-portrait drawing from his teenage years shows his precocity. His father's workshop continued and, probably together with his stepmother, Raphael evidently played a part in managing it from a very early age. In Urbino, he came into contact with the works of Paolo Uccello, previously the court painter, and Luca Signorelli, who until 1498 was based in nearby Città di Castello.

In 1504, Raphael left his apprenticeship with Perugino and moved to Florence, where he was heavily influenced by the works of the Italian painters Fra Bartolommeo, Leonardo da Vinci, Michelangelo and Masaccio.

To Raphael, these innovative artists had achieved a whole new level of depth in their composition. By closely studying the details of their work, Raphael managed to develop an even more intricate and expressive personal style than was evident in his earlier paintings.

Raphael's experimentation with this theme culminated in 1507 with his painting, La Belle Jardinière.

In 1508, Raphael moved to Rome, where he resided for the rest of his life.

Unlike Michelangelo, who had been kept lingering in Rome for several months after his first summons, Raphael was immediately commissioned by Julius to fresco what was intended to become the Pope's private library at the Vatican Palace.

This first of the famous "Stanza" or "Raphael Rooms" to be painted, now known as the Stanza della Segnatura after its use in Vasari's time, was to make a stunning impact on Roman art, and remains generally regarded as his greatest masterpiece, containing The School of Athens, The Parnassus and the Disputa. Raphael was then given further rooms to paint, displacing other artists including Perugino and Signorelli. He completed a sequence of three rooms, each with paintings on each wall and often the ceilings too, increasingly leaving the work of painting from his detailed drawings to the large and skilled workshop team he had acquired, who added a fourth room.

One of the most well-known of Raphael's paintings which was not commissioned, La Fornarina 1520 is a portrait of the artist's great love.

The painting shows a seated half-length nude looking out at the viewer in an undone dress, concealing the lower part of her body. While her left-hand rests on her lap, her right hand touches her breast. A veil, while a symbol of modesty, fails to conceal her sensuously presented upper torso. The dark landscape in the background enhances the tonal modeling quality of the painting, and richness of the turban she wears. With her flawless skin and radiant face she looks straight past us, smiling to someone on our right, and, knowing her relationship with Raphael, we have no hesitation in imagining her looking at her lover as he painted her.

Raphael signed this painting on the band on her arm, perhaps alluding to his possession of her. After a recent restoration it appears the girl was originally wearing a wedding ring. Because the wedding ring was painted out, speculation rose that Raphael had secretly married Margherita. But due to their different social classes, and the fact that he was already engaged to Maria Bibbiena, the pair had to enjoy their union in private.

The Transfiguration is the last painting by the master Raphael, he worked on it until his death in 1520. 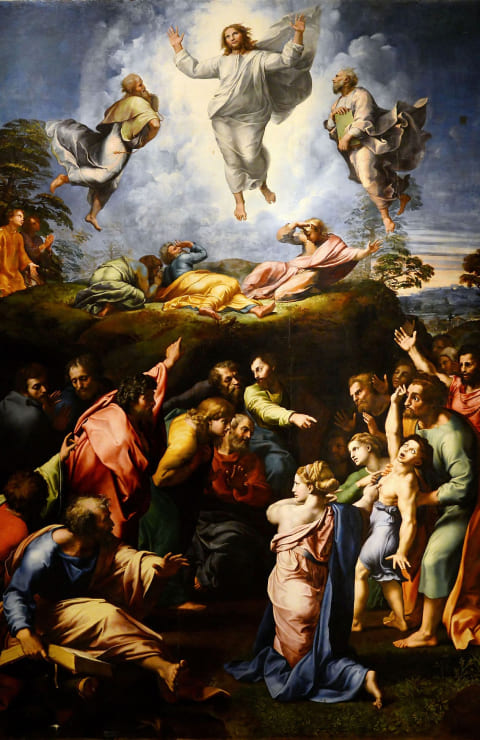 The painting exemplifies Raphael's development as an artist and the culmination of his career. Unusually for a depiction of the Transfiguration of Jesus in Christian art, the subject is combined with the next episode from the Gospels (the healing of a possessed boy) in the lower part of the painting. The Transfiguration stands as an allegory of the transformative nature of representation. It is now in the Pinacoteca Vaticana in Vatican City.

This painting combines two biblical narratives. The title refers to the story of Christ referred to in the synoptic gospels of Matthew, Mark, and Luke, in which he took three of his disciples up a mountain to show his true form, an act validated by the voice of God. The second tale is that of the Miracle of the Possessed Boy, which relates an encounter after the Transfiguration when Jesus and his disciples descended the mountain only to encounter a man who begged Christ to heal his devil-possessed son. The presentation of these two stories is visually accomplished by the contrast between above and below.

As Vasari stated, "possessors of such rare and numerous gifts as were seen in Raffaello, are not merely men, but mortal gods".

Following his death, Raphael's movement toward Mannerism influenced painting styles in Italy’s advancing Baroque period. Celebrated for the balanced and harmonious compositions of his "Madonnas," portraits, frescoes and architecture, Raphael continues to be widely regarded as the leading artistic figure of Italian High Renaissance classicism.